As mentioned previously, we at Karst Organics are focused on working direct with the coffee farmers here in Timor-Leste, to help to support and aid their growth and development in being able to establish their own self-sufficient and sustainable coffee farms.

A second coffee entrepreneur friend of ours whom we would like to introduce, is Mariano da Costa Alves, or better known to his friends as Ameta – probably Timor-Leste’s most stylish coffee farmer!

Ameta is from Atsabe, a sub-district in the district of Ermera. (Please see our previous blog post to read more about Atsabe) Being in his mid-twenties, he is another great example of the impressive new generation of young Timorese entrepreneurs working hard to carve out a better future for themselves.

Ameta, as with a large majority of the Timorese population, hasn’t had an easy time of things. When he was just 10 years old, his mother sadly passed away and in 2006 his father was incarcerated for a period of 7 years, during the 2006 East Timorese Crisis. At this time, Ameta and his younger brother were unfortunately left without any parents to take care of them. Fortunately, family connections are very important in Timor-Leste, where distant relatives will always be willing to offer help, no matter what. So, at the time of his fathers’ incarceration, Ameta’s uncle encouraged him to continue with his studies and promised that he would help to look after him and his younger brother.

In 2008, Ameta had to move to Dili in order to continue on to high school. Initially staying with family, this didn’t work out and so he went about finding his own place to live. It was at this time that he started living by the side of the river which runs through Dili, sheltering underneath a sheet of tarpaulin, together with other people who lived there, sifting sand throughout the day. As he was committed to his studies, he spent the day at school and sifted sand at night. This routine continued for 2 years, during which Ameta felt stuck and found it difficult to see how he was going to be able to free himself from this life, giving him the strength and motivation to push himself to strive for something better.

Motivated to achieve as much as possible, he attended courses at SOLS (Science of Life) in Dili after completing high school, gaining basic English language and social empowerment training skills.

It was during this time that a local NGO – Peacewinds Japan began recruiting local Timorese people to become baristas in their cafe – Café Letefoho. Being from Atsabe, Ameta already had coffee in his veins, as this was a known coffee producing region and his family already owned land which grew coffee. With this in mind, he thought that it would be a good opportunity to develop his knowledge and learn more about the processes of producing coffee.

Having been offered a job, Peacewinds invested a lot of time in Ameta, providing him with the opportunity to learn about the intricacies of coffee and train to become a skilled professional barista. Opening up his mind to looking at new opportunities of how to work within the coffee industry and utilise the coffee which his family already produce. Encouraged by his desire to do something to help to improve the economy of Timor-Leste and support the local farmers in training them about how to harvest and process quality coffee, he wanted to go back to the farm and focus on the whole process of coffee from seed to cup.

Ameta approached Peacewinds, who already worked with several coffee farmer cooperatives to sell their coffee, to see whether they would help him and feature his coffee as part of their range. Having strong faith in Ameta, Peacewinds recommended that with his knowledge and drive that he had gained over the years, he should develop his own brand of coffee and promote it directly himself.

This support gave Ameta the confidence to begin working on his own coffee. At the farm in Atsabe, he enlisted the help of his grandmother and father, directing them on how to harvest the coffee cherries, picking only the ripe red cherries as he wanted to focus on quality. Being from a humble background, they used a manual pulping machine (built by his grandfather) and large baskets to wash and ferment the 2 tonnes of coffee cherries which they were able to harvest. Finally drying them on handmade drying racks.

As a result, in 2017 Ameta launched his first batch of coffee from his coffee farm in Atsabe – Café Organiku Atsabe. Featuring the iconic image of the Mota-Bandeira waterfall on his packaging, Café Organiku Atsabe can be found on the shelves of the local supermarkets in Dili. 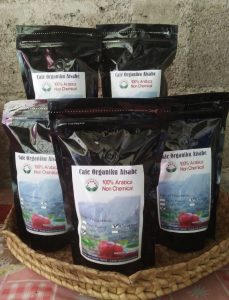 Ameta is well on his way to building up a successful coffee brand, with big plans to develop his coffee farm further and work collectively together with other coffee farmers in his village, training them to understand the efficient and sustainable way of growing and harvesting their coffee to produce a good quality cup.

His vision is to set up a central processing plant – “Atsabe, Baboe – Craik”, where he is now working on building a complete facility housing pulping, washing and fermenting, and drying stations in order to process the coffee correctly. Enabling him to work together with the other farmers to process their coffee to its highest quality. In return, they will be able to achieve higher prices for their produce, enabling them to build a sustainable business in which to support their family and local community. His focus is on quality, and through correct harvesting and processing techniques and regular cupping sessions, he aims to ensure that the quality of his coffee can be improved and developed to become a consistent high quality speciality coffee.

Karst Organics is hoping to be able to support Ameta further by hopefully being able to feature his coffee as part of our range. Keep up to date with our website to see how this develops.