The history of East Timor and its coffee.

The Democratic Republic of Timor-Leste (more commonly known as East Timor) is a small tropical island nation situated in South East Asia. It gained its independence on the 28th November 2002 and became the first new country of this millennium after more than 4 centuries of Portuguese colonisation and 25 years of Indonesian occupation.

East Timor lies approximately 700km to the north of Darwin, Australia, but feels a million miles away from its prosperous and affluent neighbour. With the assistance of international aid, local NGOs and certain factions of the private sector, capacity building has been identified as an essential focus to facilitate the Timorese people in developing their country and slowly establishing itself as its own autonomous state after years of unsettlement.

After the volatile oil and gas sector, agriculture is the mainstay economy of East Timor and coffee is the country’s main cash crop and its largest exported good. Coffee plants were first brought to East Timor in the early 19th century by the Portuguese and grow wild in the mountainous regions of the central highland districts flourishing underneath the shade of the natural tree canopies. Well known to be organic by default, East Timor is possibly the only country in the world that produces exclusively organically grown coffee. The Asia Development Bank estimates that coffee is grown by approximately a third of all households who rely on this sector for income.

2019’s Global Hunger Index (GHI) states that a third of the population of East Timor suffers chronic food insecurity and according to the government’s Agriculture and Fisheries Minister, this figure rises to between 55-58% in the coffee producing region of Ermera; in which around 50% of all Timorese coffee is grown, including the sub-district of Letefoho where we work with our partner farmers.

With the right investment and focus on education, coffee has the potential to play a vital role in the country’s development and provide sustainable incomes for families and their extended communities. 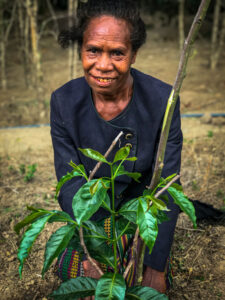 The Timor Hybrid variety of coffee has naturally evolved in East Timor over the years. This is a unique variety of coffee which benefits from the exceptional taste of Arabica combined with the robust strength against fighting common coffee plant diseases; a trait unique to the Robusta plant.

Timorese coffee is known to have a clean and smooth body with a complex aroma and taste. Our partner roasters have been continually impressed with the flavour profiles which they are able to develop. With hints of honeysuckle, apricot and watermelon, to orange marmalade, cocoa nibs and butterscotch, Timorese coffee offers a surprising and delicious diversity of taste profiles.